An elaboration on the phytochemical process that makes marijuana THC with photos and description.

The resin exuded by the glandular trichome forms a sphere that encases the head cells.

When the resin spheres are separated from the dried plant material by electrostatic attraction and placed on a microscope slide illuminated with a 100W incandescent bulb, they appear very dark when observed through a 300X microscope.  Since orange, red, and infrared are the component wavelengths of incandescent light, and since the absorption of light makes an object dark or opaque to the frequency of the incoming wave, one can conclude that these wavelengths are probably not directly involved in energizing the cannabinoid pathway.

However, the resin sphere is transparent to ultraviolet radiation.

The author found through trial and error that only one glandular
trichome exhibits the phytochemical process that will produce the amount of THC associated with pain relief, appetite stimulation and anti-nausea; euphoria and hallucinations are side-effects, however.  This trichome is triggered into growth by either of the two ways that the floral bract is turned into fruit.

Of all the ways that optics are involved in the phytochemical production of THC, the most interesting has to be how the head cells and cannabinoid molecules are tremendously magnified by the resin sphere.  These and other facts are curiously absent from the literature.  The footnotes update the literature to include electrostatic separation of the resin sphere from the dried plant material and marijuana parthenocarpy.

(1) “For all spheres, a ray drawn perpendicular to the sphere’s surface will intersect the center of the sphere, no matter what spot on the surface is picked, and the magnifying power(a) of a glass sphere is greater the smaller its size.  A sphere of glass can also bring light that is heading to a focus behind it to a point within it, with freedom from two aberrations, spherial aberration and coma, but not from chromatic aberration.  Chromatic aberration results when different wavelengths are focused on different planes and is the most difficult of the aberrations to correct.  The human eye lens also exhibits chromatic aberration, but a yellow pigment(b) called the macula lutea in the fovea, an area at the rear of the eyeball, corrects this problem by the way it absorbs blue light.”

(b)Interestingly, the resin exuded by drug-type flowering female marijuana plants has a yellow tint. Could this pigment work to correct chromatic aberration in the resin sphere like the macula lutea does in the fovea for the eyeball?

(3) The electrostatic collection of the resin spheres from dried marijuana plants with plenty of ripe seeds has been for hundreds of years the method indigenous people of North Africa and Lebanon have used to make hashish.  Obtain a round metal can 8″ or so in diameter x 3″ or so in depth (the kind that cookies come in) with a smooth lid.  Obtain 2 ounces of dried marijuana with plenty of ripe seeds in the tops.  To remove the seeds and stems, sift the marijuana tops through a 10-hole-to-the-inch wire kitchen strainer into the can.  Close the can with the lid and vigorously shake the closed can three or four times.  This gives the resin spheres an excess negative charge.  Let the can sit for a moment and then remove the lid.  Opposites attract.  The negative-charged resin spheres have been attracted to the metal surface of the can and lid which has a positive charge.  Take a matchbook cover or credit card and draw the edge across the surface of the lid.  Note the collected powder.  Observed under 300X magnification, the collected powder from this “shake” is composed of resin spheres with an occasional non-glandular trichome.  As the marijuana is shaken again and again, and more of the yellow resin spheres are removed from the plant material, the collected powder gradually becomes green-colored as the number of non-glandular trichomes increases in the collected powder.  The greener the powder, the less the effect.

(4) “Cannabinoids represent a dimer consisting of a terpene and a phenol component.  Cannabigerol (CBG) is the first component of the pathway.  It undergoes chemical change to form either cannabichromene (CBC), or cannabidiol (CBD).  Delta 9-tetrahydrocannabinol (THC) is derived from CBD.”

(5) “Pate (1983) indicated that in areas of high ultraviolet radiation exposure, the UVB (280-320 nm) absorption properties of THC may have conferred an evolutionary advantage to Cannabis capable of greater production of this compound from biogenetic precursor CBD.  The extent to which this production is also influenced by environmental UVB has also been experimentally determined by Lydon et al. (1987).”

The writer’s own experience allow for a more specific conclusion: If the UVB photon is missing from the light stream(a), or the intensity as expressed in µW/cm2 falls below a certain level(b), the phytochemical process will not be completely energized with only UVA photons which are more penetrating but less energetic, and the harvested resin spheres will have mostly precursor compounds and not fully realized THC(c).

(a)Examples of an environment where the UVB photon would be missing from the light stream include all indoor cultivation illuminated by HID bulbs and in glass or corrugated fiberglass covered greenhouses.

(b)”The maximum UVB irradiance near the equator (solar elevation angle less than 25 deg.) under clear, sunny skies is about 250 µW/cm2.  It was observed that the daily solar UVB in Riyadh, Saudi Arabia (N24.4Lat.) decreased from September to December by about 40% (Hannan et al. 1984).  The further a person is from the tropics, the less UVB radiation there is: the average annual exposure of a person living in Hawaii is approximately four times that of someone living in northern Europe.”  Below are some UVB readings taken in Hoyleton, Illinois, on a clear sunny day in June by David Krughoff as reported in Reptile Lighting 2000.

(c)Cannabinoid pathway: Anywhere in this pathway UVB does a better job than UVA in energizing a phytochemical reaction that will produce more fully realized THC because “all cannabinolic compounds show an absorption maximum between 270 and 280 nm in the ultraviolet region.”

(7) #1: The ovum has been fertilized and there is a seed developing: In the areas of the Northern Hemisphere where indigenous people have grown heterozygous drug-type marijuana for hundreds of years, pollination is used to trigger the growth of the capitate-stalked glandular trichome on the floral bract and concomitant leaves of the flowering females before the autumnal equinox(a) so the majority of seeds will be ripe(b) before November.

The longest photoperiod that will trigger parthenocarpy in unfertilized flowering homozygous(d) Indica female marijuana plants is 13:00 hours, give or take 15 minutes.  This effect can be obtained in the month of August at N35Lat, and because the capitate-stalked glandular trichomes received plenty of UVB during this month at this latitude, the harvested resin spheres had fully realized THC.  Rating: euphoria and hallucinations, major appetite boost and pain relief, deep dreamless sleep.  These plants seldom grow taller than four feet but potency makes up for the reduced harvest.

The gene pool is heterozygous if a flowering female marijuana plant is not parthenocarpic by the end of the first week in September in the Northern Hemisphere.  If this is the case, pollination is used instead of parthenocarpy to trigger the growth of the capitate-stalked glandular trichome before the autumnal equinox to obtain as much fully realized THC as possible in the harvested resin spheres by the time the majority of the seeds are ripe.

The longest photoperiod that will trigger parthenocarpy in unfertilized flowering heterozygous female marijuana plants is 11:00 hours, give or take 15 minutes: This effect can be obtained in the month of November at N35Lat.  Because of the low intensity of UVB radiation at this latitude at sea level during November, the harvested resin spheres evidenced only slightly more THC than precursor compounds.  Rating: mild to medium euphoria, appetite boost and pain relief, good snooze.

Thai marijuana falls into this 11:00 hour category, and its parthenocarpy is characterized by an inflorescence in which many floral bracts are attached to an elongated meristem.  It is these elongated meristems that are harvested to become a THAI STICK.  On the other side of the world, Mexican marijuana grown around the same latitudes (Michoacan, Guerrero, Oaxaca) also falls into this short-day parthenocarpic category and the unfertilized marijuana will become “sensimilla” in the 11:00 hour photoperiod which begins in mid-December in that region.  The winter sunshine in those latitudes has enough UVB intensity to produce fully realized THC–unlike the winter sunshine at N35Lat.

All unfertilized flowering female marijuana plants will become parthenocarpic in a 9:00 hour photoperiod (15:00 hour dark period): This can be obtained in the month of December at N35Lat.  At this latitude in this month there is not even enough UVB in sunlight for precursor vitamin D3 to develop in human skin.  The phytochemical process will not produce fully realized THC when UVB falls below a certain level of intensity expressed in µW/cm2.  Rating: no effect.

(a)In the Northern Hemisphere above the Tropic of Cancer, the key to all marijuana potency is this: The more days of sunlight the capitate-stalked glandular trichomes’ resin spheres accumulate before the autumnal equinox the more fully realized THC.

(c)The photoperiodic response is controlled by phytochrome.  “Phytochrome is a blue pigment in the leaves and seeds of plants and is found in 2 forms.  One form is a blue form(Pfr), which absorbs red light, and the other is a blue-green form(Pr) that absorbs far-red light.  Solar energy has 10X more red (660nm) than far-red (730nm) light causing the accumulation of Pfr.”  The first and last hour of a day’s sunlight is mostly red light because of the scattering effect on blue light.  “So at the onset of the dark period much of the phytochrome is in the Pfr form.  However, Pfr is unstable and returns to phytochrome Pr in the dark.”  The red light in sunrise returns the Pr to the Pfr form.  “Phytochrome Pfr is the active form and controls flowering and germination.  It inhibits flowering of short-day plants (the long night period is required for the conversion of Pfr to Pr) and promotes flowering of long day plants.”

(8) It appears that the resin sphere acts as an UVB receptor and magnifying lens. The latter apparently lets it gather in a lot more photons than would otherwise be possible; because a lens also acts as a prism, the resin sphere may prevent some wavelengths from being focused where the phytochemical processes are taking place because they could interfere with the phytochemical process that makes THC. 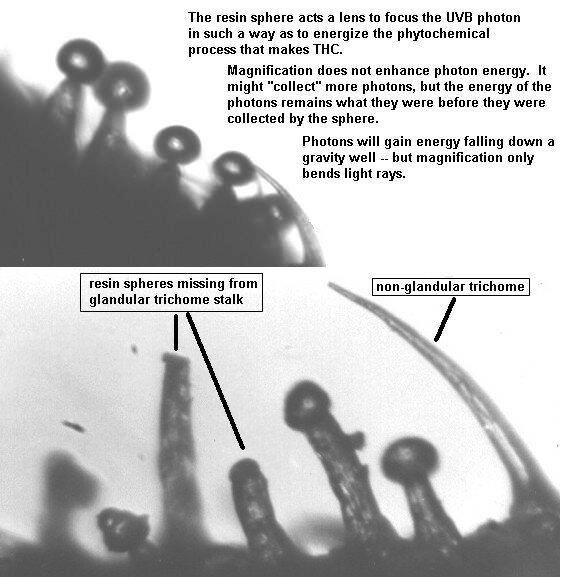 Just enter your name and e-mail address below to join our mailing list. Peace!
Your information will never be shared or sold to a 3rd party.